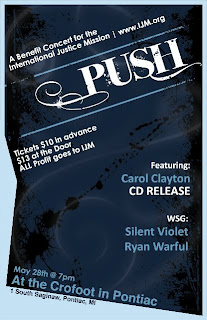 It's hard to believe that we're just 10 days away from our IJM fundraising event!

So far we've had a pretty great response, considering the fact that it's our first event. We were initially in the Vernors room at the Crofoot in Pontiac, Michigan. But we sold it out in about 4 weeks and were moved to a bigger room.

Our artists have been on the radio, and a couple of the newspapers have run our press release. We haven't gotten the media attention I would have liked, but we're in the Motor City were the news is "all things auto". Tough competition.

Carol's EP is finished. The cover art is done. The final product is on it's way. We have books, CDs, DVDs, t-shirts and even some temporary tattoos to give away. And we have LOTS of IJM donation envelopes and information.

Now that we're getting so close, I'm getting really excited! I can wait to hear Carol's new music! And, I'm looking forward to the opportunity to talk to people about IJM, the work they do, and how people can help!

I want to give a HUGE shout-out to the IJM staff for all of their help. They've provided so many resources and fun things for this event. Their support has been incredible. Hanna Schmidt and Austin Graff... you guys ROCK!

Now that we're in a bigger location, we have tickets available! If you're in/near Pontiac, Michigan, PLEASE come support this event! Visit www.push-event.com for ticket pricing and to order tickets online.

Back in March I had the unbelievable privilege of gathering with nearly 1,000 other people at International Justice Mission's annual Global Prayer Gathering. It was 2-1/2 days filled with stories of victims rescued, perpetrators convicted, hope rising, and the power and grace of an almighty God who is at work in the fight against human trafficking.

Many things from that weekend have stuck with me. But one sentence stands out - above all else I saw and heard, this resonates in my heart, and causes me to stop and consider the depth and sincerity of my own commitment to this fight.

In his final words to the friends and family gathered at the GPG, Gary Haugen encouraged our continued commitment to the people who are on the front lines of this fight: the victims; the investigators; the law enforcement officials; the after care workers; and so many others who are efforting to make a difference.

"These people," he said, "don't need our short spasms of passion, but our long obedience in one direction."

I don't know about you, but short spasms of passions are much easier for me. They don't require much thought, or much sacrifice. Just a response in the heat of the moment; a response that is quickly forgotten. I can pray and mourn over the tragic devastation caused by human trafficking - especially during a weekend like GPG - and then very quickly push it to the "back burner" when I return to my normal, everyday life. I hate admitting that I can be so fickle about something so awful, but the propensity exists - whether I admit it or not.

Knowing this about myself, Gary Haugen's word's have all but haunted me these last few months. What, exactly, are my efforts in the fight against human trafficking? Is this the beginning of a long obedience, or just another passion spasm? I want to believe it's the former. I want to believe that this will be a life's work; that I will look back at the end of my time on earth and see that I've spent decades engaged in this fight.

The purpose of this post is not so much to bear my soul (though I guess I am, to some degree). It is meant, instead, to be an encouragement to those who are on the front lines.

Because Gary is right.

You deserve consistent, committed support. You experience things I could never imagine. You put your lives at risk in order to rescue people that the rest of the world has forgotten (or chooses not to see). And you do it everyday of your lives. I can't begin to express the admiration and respect I feel towards those of your who are involved in such a dark, difficult and costly work.

Right about now, I could easily begin making grandiose statements about my lifelong commitment to support those who are fighting such a difficult fight. I could promise to continue doing my small part to raise awareness - about them, their work, and the truths of human trafficking.
I could.
But I won't.
Instead, I will let time (and my actions) speak for themselves.

To those who are on the front lines, know that we're with you. Know that you are remembered, prayed for, believed in and supported. We may not know all the details of your work, but we know you're out there. Know that, even when you feel like you're standing all alone, you are continually remembered by those of us who strive to do our very best to support you.
Posted by Stephanie at 3:02 PM No comments: 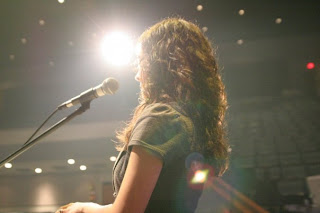 I'm excited to announce PUSH has sold out its venue and been moved to a larger location!

PUSH is an event aimed at raising awareness about human trafficking and modern-day slavery, and raising money for International Justice Mission.

Detroit singer/songwriter Carol Clayton will be debuting her EP at the event, which is being held at the Crofoot in Pontiac, Michigan on Thursday, May 28th.

Tickets are just $10 in advance, or $13 on the day of the show.
If you live in or around the Detroit area, buy a ticket and come hang out! If you don't live in the area, but would still like to support our efforts, Carol's CD will be available on iTunes beginning May 28th (or possibly sooner).

For more information, visit www.push-event.com.
Posted by Stephanie at 1:49 PM No comments:

Trafficking Victims to get help

A charity organization in London has been awarded a $4.4 million grant aimed at bolstering it's effort to rescue and support victims of human trafficking.

The Poppy Project, which is based out of South London, has been helping trafficking victims since 2003, providing refuge to hundreds of men, women and children.

Read the full article here.
Posted by Stephanie at 1:35 PM No comments: