"You want these people?" 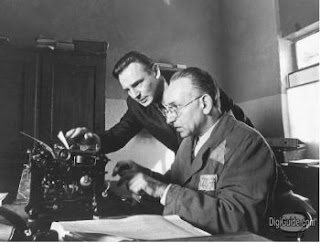 A movie was released in 1993 called Schindler's List. It was about a German man who took it upon himself to rescue a handful of Jews from the Nazis. He did it by employing them in a factory which produced nothing. He secured their freedom the old fashioned way; he bought it. The German soldier he bribes is shocked... "You want these people?" he asks. "These people", Schindler replies. "My people. I want my people."

One of the most powerful scenes of this movie is near the end. The war is over, Nazi's defeated, and Oskar Schindler is reflecting on this unusual work he's done the past few years. Rather than celebrating the fact that he was able to rescue some, he's overcome with sorrow, realizing he could have saved more.

Here is the dialogue between Schindler and Itzhak Stern, a Jewish accountant who assisted Schindler:

I was thinking of that scene this past weekend during a trip to Chicago. I was standing in line at a Starbucks, and noticed - on the wall - this elaborate display of digital picture frames. There must have been 10 - 12 of these things, all arranged to look very modern and artsy, displaying images of everything from waterfalls and sunsets to coffee beans. What do you think that display cost?

I've discovered a shocking reality about human trafficking and modern-day slavery; the actual dollar amounts in each individual case are often very small. I've read about women who have been enslaved for the rest of their lives because they had to borrow $25 to pay a child's medical bill. $25. It's the price of a concert ticket. But mom doesn't have it, so she enters the employ of a slave owner, ostensibly to "work off" her debt, but somehow the debt never gets repaid. So she is a slave for the rest of her life. In all likelihood, her children become slaves as well, and her children's children. Generations enslaved over just $25.

Young girls are sold to brothel owners for similar amounts of money. Maybe more... $50 or $75... To us it's a night out. The people in developing countries, it's 3 months wages. And it's the cost of buying and selling a 12 year-old-girl into a life of forced prostitution. Rape for profit.

I think of these stories when I look around our country at the thousands (millions) of dollars we spend (waste) on superfluous things. I wonder if we will ever stop to ask ourselves if there isn't a better use of our money? Will we ever seriously consider the possibility that we could use our wealth for something more valuable than a new Coach purse, a plasma screen TV or a fancy cup of coffee?

I'm not suggesting that we pay off corrupt slave owners; that would only compound the problem. But it should give us pause when we realize that the same amount of money we spend on dinner at our favorite restaurant could spare someone from the horrors of slavery.

There are organizations like International Justice Mission that, for the price of a Red Wings ticket, can secure someone's freedom from a slave owner or a brothel. They can conduct an investigation, and gather the evidence necessary to put a trafficker in jail. All for the price you or I would spend for a night of entertainment.

We have the means to end slavery and human trafficking in our lifetime. But first we have to consider whether freedom is more important than a latte. Will we look back and regret all that we could have done?
Posted by Stephanie at 8:45 AM No comments:

For now, I want to share some of the report's opening remarks as written by Antonio Maria Costa, Executive Director of the United Nations Office on Drugs and Crime.


---
"The term trafficking in persons can be misleading: it places emphasis on the transaction aspects of a crime that is more accurately described as enslavement. Exploitation of people, day after day. For years on end.

After much neglect and indifference, the world is waking up to the reality of a modern form of slavery. The public and the media are becoming aware that humans prey upon humans for money....

Over the past few years, the number of countries that have taken steps to implement the foremost international agreement in this area - the UN Protocol against Trafficking in Persons - has doubled. However, there are still many countries, particularly in Africa, that lack the necessary legal instruments...

... as of 2007/08, two out of every five countries covered by this report had not recorded a single [trafficking] conviction. Either they are blind to the problem, or they are ill-equipped to deal with it...

We still lack a global understanding of the subject, and of how its components interface to make the whole... The crisis we face of fragmented knowledge and disjointed responses intensifies a crime that shames us all."
Posted by Stephanie at 4:15 PM No comments: 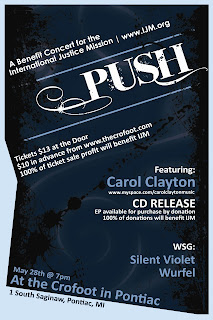 On Thursday night, May 28th, at The Crofoot in Pontiac, Metro-Detroit singer/songwriter Carol Clayton will be the featured artist at a fundraising event to benefit International Justice Mission.

This show is celebrating the release of her first EP which was recorded especially for this event.

IJM is a human rights agency that seeks justice for victims of slavery, sexual exploitation and oppression. IJM has a team of lawyers, investigators and other professionals who work to secure freedom for victims and bring their perpetrators to justice. Learn more at www.ijm.org. All profit from ticket sales and 100% of donations from EP purchases will go to IJM.

Carol is happy to share the stage with some very talented friends, Detroit’s own Silent Violet and Wurfel.

This show is an invitation for you to partner with Carol as we aid the tireless efforts of IJM on behalf of victims of human trafficking. Tickets are just $10 in advance, $13 at the door and can be ordered online at The Crofoot's website.

PUSH against injustice. PUSH ourselves out of apathy and into action. PUSH.
Posted by Stephanie at 11:34 PM 1 comment: 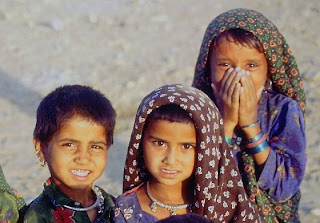 According to an organization called the Naujawan Bharat Sabha (NBS) about 16 kids are reported missing everyday in India's capital city, New Delhi. Many of them fall victim to human trafficking.

The kidnapping and trafficking of children is so prevalent that NBS has found children who keep sand in their pockets as a means of defense, intending to throw it in the face of anyone who tries to take them. Some are even taken from their homes while their parents are working.

Many of the children are poor, which is a common theme in human trafficking. Many, if not most, trafficking victims around the world are extremely poor. Some are lured away by the promise of a good paying job in another country, only to find - upon their arrival - that they are slaves in a brick kiln, a brothel, or a wealthy person's home. Others are sold by family members who forsake the child's safety in exchange for a few dollars.

Source: Bernama (Malaysian National News Agency
Posted by Stephanie at 10:17 AM No comments: