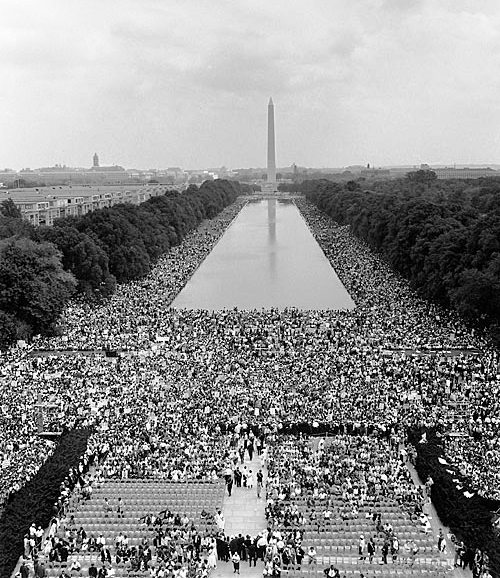 As the nation marked the 50th anniversary of the March on Washington yesterday, we were reminded that in the struggle for civil rights, laws changed only because people demanded that they be changed. Politicians took action because “we the people” took action first.

It was true then, and it's true now.

President Obama summed it up perfectly when he said:
“Change doesn’t come from Washington, change comes to Washington.”

It got me thinking about the time and energy we've all spent working to end human rights abuses around the world. We've enjoyed some great successes, and they've been encouraging and energizing. But just like the fight for civil righs continues, the fight for human rights continues as well.

And just like baseball is a "game of 90s," political advocacy is a game often measured and won in small, incremental successes. During the Let Freedom Ring event yesterday, one speaker after another mentioned individuals whose efforts helped ignite sparks that eventually became the fire of the civil rights movement.

The March on Washington was neither the beginning, nor the end, of the civil rights movement. But on that day, 50 years ago, change came to Washington, and Washington had no choice but to respond.

And as we continue our efforts, we ignite small sparks. Eventually, they become a fire that reaches the very doorstep of Congress and demands a response.

During his speech yesterday, former President Bill Clinton challenged the crowd to stay strong in the face of opposition and set back. If changes to the Voting Rights Act mean some people have to wait in longer lines in order to vote, then wait in longer lines - but don't give up, he said.

Similarly, as we face challenges and opposition, I hope we determine to settle in and persevere, encouraged by the victories we've already won, and energized by the knowledge that ours is a good and necessary fight.

I'm proud of all of you and the work you do. And I'm proud to be part of such a committed group of people (even though I've been somewhat 'in absentia' lately).

Keep up the great work, and thanks for indulging me and my ruminations (or 'musings' if you prefer). :)
Posted by Stephanie at 1:20 PM